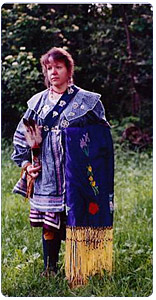 Lee Dingus, is an established artist in both the traditional and contemporary media of Native American beadwork and silver work. Lee creates a wide range of styles with her art. A large portion of her art is done in the form of earrings and necklaces. She has contemporary range of several dozen different styles. The material she uses is varied from all glass seed beads in different sizes, finishes, colors, and styles, to long glass, stone, semi-precious stone beads, porcupine quills both natural and natural dyed by her. On occasion she incorporates silver, brass, or gold in her creations. On the traditional end she does a lot of woodland “overlay”: work on leather and cloth incorporation her designs into dance shawls, clothing or other type of wearable art. Lee has memberships in several art organizations, and has served on the board of South Arts and South Hills Art League.

In addition to her art Lee has been active in many aspects of Native American Affairs and human rights for over 20 years. She has served as Chairperson for the VA Pittsburgh Health care system EEO committee chairperson, and the Naive American Program Manager and is the Current Chairperson of the Pittsburgh Federal Executive Board Native American Heritage Committee.

In addition she has served on various boards in the past to many local and national Native American Organizations. Lee is Co-founder of Echoes of the our Directions, a Native American Cultural and reference source. Lee has been a diversity trainer and Equal rights trainer, for the VA healthcare system both on local and national level in both of area of Native American culture and general diversity training. Lee has provided diversity training to the City of Pittsburgh Police department, as well as local police departments and college and universities at the tri-state area. Lee has served the Internal Revenue Service and Social Security Admistration as a Native American Adviser until her retirement with the United States Government. She Currently works as a part time Test Administrator for Personal Professional Centers but continues to serve as the Chairperson of the Pittsburgh Federal Executive Board Native American Heritge Committee and as a community Native American advisor for the Federal government and the community at large. Lee also is currently an adjunct professor for the Community College of Allegheny County teaching the Native American Anthropology 3 credit course and in addition she co-teaches with Earl her husband at the University of Pittsburgh’s Osher Lifelong Learning Institute a Native American History and Culture Program.

Lee is a storyteller of traditional Native America stories and a traditional Seneca style dancer. Lee uses her beadwork, story telling, dancing, and lecture skills in conducting youth art camps, after school programs and various art classes for both children and adults.

In addition to her arts, and Native American concerns, she also has been an activist for local and national human rights, employee rights, and veterans concerns with both the EEOC (Equal Employment Opportunity Commission) and AFGE (American Federation of Government Employees).

Lee currently works for Pearson Education, where as part of her collateral duties she is an International Diversity and Inclusion Program Manager with emphasis in the Indigenous fields, including but not limited to hosting a blog, helping with curriculum development and reform, and consulting with all levels of managers, and employees on Indigenous issues and concerns and projects.