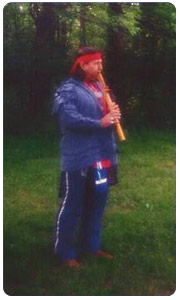 Earl Dingus, Eastern Cherokee roots are in North Carolina, Tennessee, and Virginia. In his early teens, he began working silver and his desire to follow the traditional art forms of his Tsalagi (Cherokee) ancestors came from his spirit as he developed his own style. After many years he has become a self taught Silversmith, combining natural products such as wampum, turquoise, corals, jet, mother of pearl, malachite, petrified wood, to name but a few, into his unique jewelry and sculpture creations.

For several decades, Earl has spent countless volunteer hours at various Native American Indian Organizations, volunteering for various special projects such as newsletters and special public events. All dedicated to preserving and creating awareness of Native American Indians and the various cultures that are represented by the over 500 tribes and nations. During this time frame, Earl has served in many capacities for these various Native American Indian organizations from President, chairperson, advisory council member, board member and employee full time Social Work specialist. Earl is co-founder of “Echoes of the Four Directions” a cultural, education, and referral source for all people, on Native Americans. Earl is currently a member of the Pittsburgh Federal Executive Board Native American Heritage Committee where he is founder and chair person of the Annual Art exhibition and co-editor of the nationally published newsletter, “Roots Awakening.” While working with both the P.F.E.B/N.A.H.C. and echoes of the four directions a large part of his time is devoted to working with the many school districts including the Pittsburgh public schools in the area of curriculum reform, and cultural diversity.

Earl is currently an adjunct professor Community College of Allegheny County teaching the Native American Anthropology 3 credit course and in addition he co-teaches with Lee his wife at the University of Pittsburgh’s Osher Lifelong Learning Institute a Native American History and Culture Program.

In addition, Earl expressed his love and honor of our natural world when he was an Assistant Naturalist at Latodami Nature Center of Allegheny Counties North Park for many years. He is now a volunteer Naturalist for Pittsburgh City Parks at Frick Parks Nature center.

The rest of his efforts and time are concentrated on being a full time Silversmith, using the traditional old style methods. Through these traditional and contemporary methods he has received various awards and recognition from many art leagues and shows throughout the area.

Earl is a member of the Pittsburgh center for the Arts, Pittsburgh Society of Artists, Whitehall Art League, South Hills Art League, and South Arts, all through which he participates in their exhibitions( and has served in various officers positions). His art is sold at numerous precious events, galleries, Pow-wows, cultural events, art shows, and even historical events throughout the tri-state area.

In addition to being an accomplished and recognized artist/silversmith, Earl is also a talented Traditional Native American Flute Player. He gives concerts, talks and demonstrations of this traditional music form. He recently had a world premiere performance of “We get our Music from Nature” with musical Director, William Burkhard and the Pittsburgh Civic Orchestra with original music composed just for this event.

Due to the fact that Pittsburgh is a crossroads and meeting point for all Native American Indian Nations, he incorporates all the traditional methods, and styles such as Hopi, Navajo, Iroquois, Kiowa, and of course his own Cherokee, into his own blend of Native American Artistry.